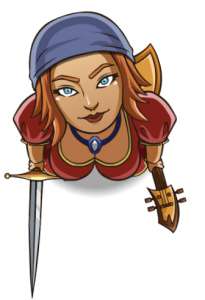 D20Studios is seeking a composer to create an epic music track for our indie game trailer as a work-for-hire. Because we’ve received such an overwhelming response from talented musicians, we’ve decided to host a contest and invite our community to help us pick the track best suited for our upcoming game, Summoners Fate.

Our sincere spirit and motivation for this competition is a win-win: for composers an opportunity to compete for exposure, recognition and money, for us, an awesome music track for our game trailer, and for our community, a chance to influence an integral part of our game.

We are highly passionate about this project and hope that those choosing to participate in the contest see this as opportunity for expressing their passion and excitement as well. That’s the kind of people we want to work with.

A: No – the footage shown on the Kickstarter draft is *not* the actual trailer, but a rough cut of gameplay representing our current state of development and intended to showcase our visual style and how the story will be delivered. Design your music according to your own creative interpretation of style that would best represent our game to an audience seeing it for the first time on Kickstarter. We will arrange the video sequences in the final cut trailer to sync with the beats of the winning music track.

A: It’s our intent that each entrant will interpret the game differently and create something totally different and original. The key factor being judged/voted on is the emotional impact of the music and how it uniquely connects with the spirit of the game.

A: No, we are asking for full ownership rights of the winning track. This means you would be unable to sell the track or use it for other commercial purposes. We will credit the winner as composer of the music as well as promote the winning artist in our Kickstarter campaign. We will also allow the winner to showcase the track in their personal work portfolio.

For questions related to the contest, feel welcome to reach out to us at contact@d20studios.com.

The Work-For-Hire Indie Game Trailer Music Competition (the “Contest”) is being sponsored by D20Studios, LLC (the “Sponsor”). Each person or entity who enters the Contest (each, an “Entrant”) agrees to abide by the terms of these Official Rules and by the decisions of the Sponsor, which are final and binding on all matters pertaining to the Contest.

Entrants may enter only once. Entrants must provide all of the information requested. Entries that are incomplete or do not adhere to the rules or specifications may be disqualified at the sole discretion of the Sponsor.

The Sponsor will nominate (3) finalists based on each Entered Track’s quality and potential to represent the Summoners Fate game trailer. Finalists will be notified via email and announced by Wednesday October 18th, 2017 on the Contest Website.

The finalists’ Entered Track’s will be showcased on the Contest Website for public community voting. The voting period will begin on Wednesday October 18th, 2017 and end on Thursday October 19th, 2017. The winner will be chosen by the Sponsor based on votes, quality and potential to represent the Summoners Fate game trailer.

The winner will be announced on the Contest website on Friday October 20th, 2017.

The winner shall receive $350 United States dollars via PayPal. By accepting the prize, winner agrees to give full ownership rights of the Entered Track to the Sponsor. The Winner will be solely responsible for bearing any income or other taxes, fees, or other costs relating to the prize.

This Contest is open only to those who sign up at the Contest Website and who are 18 years of age or older and is void where prohibited by law. Employees of the Sponsor, its affiliates, subsidiaries, advertising and promotion agencies, and suppliers, (collectively the “Employees”), and immediate family members and/or those living in the same household of Employees are not eligible to participate in the Contest.

In addition to the foregoing general eligibility requirements, the following additional requirements must be met:

The Contest is subject to all applicable federal, state, and local laws and regulations. Void where prohibited.

By entering the Contest, each Entrant agrees to release and hold harmless the Sponsor and its subsidiaries, affiliates, advertising and promotion agencies, partners, representatives, agents, successors, assigns, employees, officers, and directors from any liability, illness, injury, death, loss, litigation, claim, or damage that may occur, directly or indirectly, whether caused by negligence or not, from: (i) such entrant’s participation in the Contest and/or his/her acceptance, possession, use, or misuse of any prize or any portion thereof; (ii) technical failures of any kind, including but not limited to the malfunction of any computer, cable, network, hardware, or software, or other mechanical equipment; (iii) the unavailability or inaccessibility of any transmissions, telephone, or Internet service; (iv) unauthorized human intervention in any part of the entry process or the Promotion; (v) electronic or human error in the administration of the Promotion or the processing of entries.

By entering the Contest, each Entrant consents to the use of the Entrant’s name, photograph and likeness (if an individual), logo (if any), and Entered Track for advertising, promotion, marketing, and administration of the Contest without additional compensation, to the extent permitted by law. Each entrant further agrees that Sponsor may use any and all information collected through the Contest, including the Entrant’s name and contact information, for marketing or other purposes whether or not related to the Contest, to the extent permitted by law and Sponsor’s privacy policy, which may be found on the Contest Website.

By entering the Contest, each individual submitting entry represents and warrants to Sponsor that:

If Entrant’s Entered Track infringes upon the intellectual property right of another, Entrant will be disqualified at the sole discretion of the Sponsor. If the content of Entered Track is claimed to constitute infringement of any proprietary or intellectual proprietary rights of any third party, Entrant shall, at their sole expense, defend or settle against such claims. Entrant shall indemnify, defend, and hold harmless the Sponsor from and against any suit, proceeding, claims, liability, loss, damage, costs or expense, which Sponsor may incur, suffer, or be required to pay arising out of such infringement or suspected infringement of any third party’s right.

Sponsor reserves the right, in its sole discretion, to cancel, terminate, modify or suspend the Contest should virus, bug, non-authorized human intervention, fraud, or other cause beyond Sponsor’s control corrupt or affect the administration, security, fairness, or proper conduct of the Contest. In such case, Sponsor may select the Winner from all eligible entries received prior to and/or after (if appropriate) the action taken by Sponsor. Sponsor reserves the right, in its sole discretion, to disqualify any individual who tampers or attempts to tamper with the entry process or the operation of the Contest or website or violates these Terms & Conditions. Sponsor has the right, in its sole discretion, to maintain the integrity of the Contest, to void votes for any reason, including, but not limited to: multiple entries from the same user from different IP addresses; multiple entries from the same computer in excess of that allowed by Contest rules; or the use of bots, macros, scripts, or other technical means for entering. Any attempt by an entrant to deliberately damage any website or undermine the legitimate operation of the Contest may be a violation of criminal and civil laws. Should such attempt be made, Sponsor reserves the right to seek damages to the fullest extent permitted by law.

THIS CONTEST IS GOVERNED BY THE LAWS OF THE UNITED STATES AND THE STATE OF UTAH, WITHOUT RESPECT TO CONFLICT OF LAW DOCTRINES. As a condition of participating in this Contest, participant agrees that any and all disputes that cannot be resolved between the parties, and causes of action arising out of or connected with this Contest, shall be resolved individually, without resort to any form of class action, exclusively before a court located in Utah having jurisdiction. Further, in any such dispute, under no circumstances shall participant be permitted to obtain awards for, and hereby waives all rights to, punitive, incidental, or consequential damages, including reasonable attorney’s fees. Participant further waives all rights to have damages multiplied or increased.

For the name of the Winner, which will be available on October 20th, 2017, check the Contest Website or send a stamped, self-addressed envelope to:

The Contest is hosted by D20Studios, LLC and is in no way sponsored, endorsed, administered by, or associated with Soundcloud, PayPal, Facebook, Twitter, Instagram or Kickstarter.

Support us on Kickstarter